Kandid Memories
Eli & Dad left for San Diego for Oceanography Club, Walker went on a Snow Campout for Scouts, and that left Alayna and I alone for some super fun Girl Time!!! 🙂
After we dropped everyone off at their different departure locations Alayna and I decided to head home to pop some popcorn and watch the new Disney movie “Frozen”. It was SO good!!! We had a slumber party in my bedroom and partied til we both crashed!
Today we got up bright and early and had Bosa Donuts for breakfast and then we headed to the new Gilbert Temple. Today is the first day of the Open House. We were just planning to drive by but the parking lot didn’t look that full so we pulled in. We took a few pictures and then one of the ushers asked us if we wanted to take a tour.
We told him our reservations for a tour weren’t until next month. He said the ‘standby’ line was really short and if we wanted to go through we were welcome to! My first thought was man, we aren’t really dressed properly to enter the temple….but then my next thought was…YES!!!! (I’m sure the Lord will forgive us this one time. 😛 ) 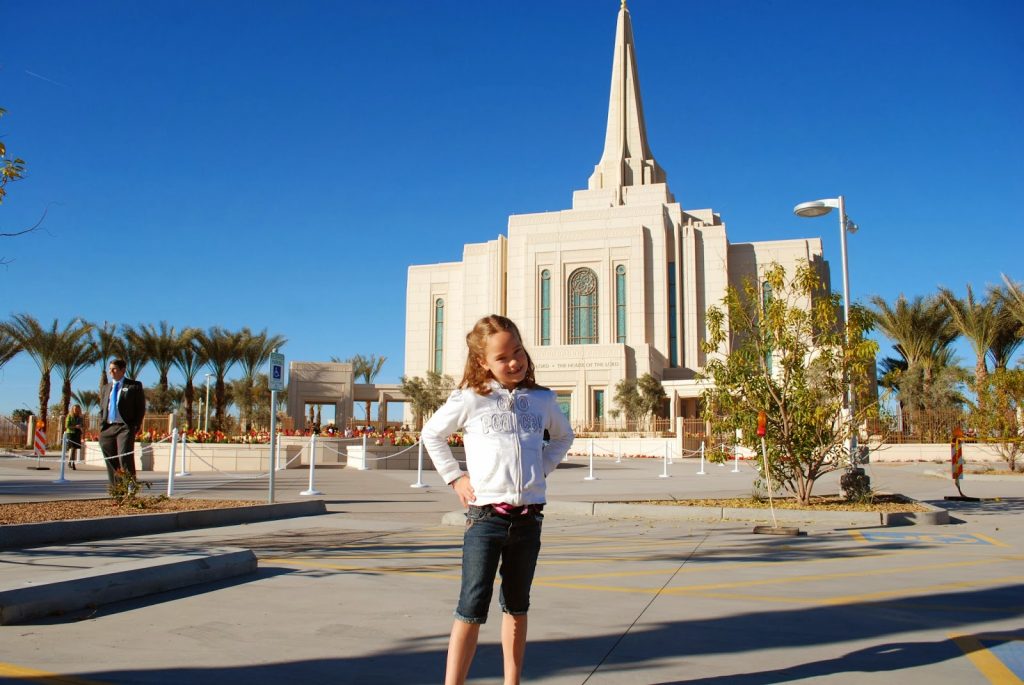 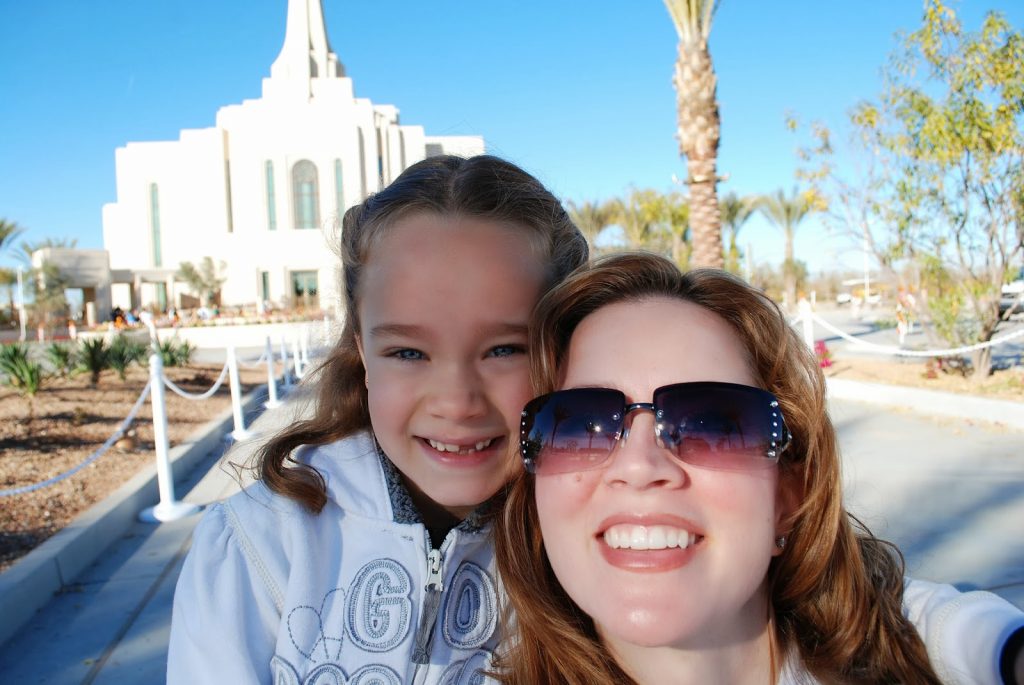 As we were waiting in the standby line we ran into our wonderful friends the O’Loughlin’s! They were the ones that made it possible for Eli to go on his Oceanography Trip! They asked about him and when he left and chatted a bit. It was so neat running into them. They are working at the temple as Ushers! 🙂
For the Open House you begin at the Stake Center which is in the same parking lot. They give you a pamphlet about the temple giving you a brief explanation of each of the different rooms. They show you a short video about the history of the church and the importance of temples to Latter Day Saints, and then it’s time to go on the tour.
Before you are allowed to enter the temple they place white booties over your shoes to keep the temple floors clean and beautiful. Alayna had a lot of questions about them. 🙂
They take you through starting at the front desk and point out to everyone to look for all of the gorgeous paintings throughout the building. The Baptismal Font was next, which is located at the bottom of the temple. The temple is the only place where sacred ordinances like baptism and eternal marriage can be performed in behalf of those who have died. These ordinances are in important part of God’s eternal plan for His children. As you enter the room you see the 12 oxen that hold the font on their backs and the guide explained that they represent the 12 tribes of Israel and we can perform baptisms and other ordinances for our ancestors who have died. The Apostle Paul referred to this important redemptive work for the dead when he asked, “Else what shall they do which are baptized for the dead,if the dead rise not at all? why are they then baptized for the dead?” ( 1 Corinthians 15:29). This is why we do genealogical research. We seek out our ancestors and then see that temple ordinances are performed in their behalf. It is then up to the individuals who have gone on to the next life to choose whether to accept the ordinances of the gospel. But if they do, the work has already been done, and eternal family ties have been created.
Alayna really wanted to feel the water. She kept asking if she could touch it. I had to have a firm grasp on her hand. I’m pretty sure she would have jumped in if she could. She’s so excited about her own baptism coming up this year! As you exit the baptistery you pass the Confirmation Room. Everything done in the temple-ordinances, instruction, promises, and prayer -is done in the name of Jesus Christ for those who are dead so that, if they choose they can receive the full blessings of Christ’s Atonement. Paintings and murals throughout the temple reflect the life and teachings of the Savior.
We were taken to the Changing Room  where worthy members go to change from their street clothes to their temple clothes. Temple clothes are all white; a white dress for women, and white pants and shirt for the men. The white clothing worn is symbolic of  purity and cleanliness and that all who enter are the same in God’s eyes.

We headed up stairs and we were taken to the Chapel. In this room you can read scriptures, pray, and sometimes you sing hymns when you have a Stake Temple Session. As we waited in this room for a bit for the tour in front of us to finish up Alayna noticed the Agave Plant carved into the end of the wood on the pew. (The Agave Plant is themed throughout the entire temple. It has significance as a local desert plant but also as it grows the older lower leaves become etched on the upper younger leaves and is symbolic of how our ancestors leave their mark on our lives and on the generations that follow. The interlinked agave leaf patterns symbolize the eternal nature of marriage and family.) I watched her as she took her finger and began to trace the image over and over, carefully following the pattern of each leaf. In that moment I recalled a quote from Thomas S. Monson. He said, “As our children touch the temple, the temple will touch them.” I closed my eyes and prayed that this would be the moment the temple would touch her heart and forever be etched there.

Once the tour group in front of us was finished we were taken to the Instruction Room. This is where we learn of our premortal and mortal lives and of the blessings we can receive in the next life. We learn about who we are, where we came from, and why we are here on earth, and where we go after this life is over.
Then they took us passed the Bridal Room and up to the most amazing staircase I’ve ever seen. It looked as though it was out of an old time Hollywood movie but only better! We went up the staircase and were taken to the Celestial Room. Now I’ve been to a couple of Celestial Rooms, but nothing prepared me for the grandeur and Spirit I felt in that room…. Nothing….. It took my breath away. The carpet was stunningly white, the chandelier was extraordinary, and I was just overcome with emotion as I stood holding my sweet daughter’s tender hand and thought about my Savior and Heavenly Father and the significance of where we were at that very moment. I looked down at Alayna to see her reaction and her eyes were as big as saucers and she looked up at me and said, “This is most beautiful thing I’ve ever seen!” I choked back my tears and whispered to her, “Me too sweetie, me too.” I gave her hand a little squeeze and we just stood there soaking in the remarkable, sacred, and awe-inspiring moment. It wasn’t too difficult for my mind to fast forward time and think about what it will be like to be able to attend the temple with my daughter and two sons as they prepare to take out their own endowments, and as they are called on missions and to be there with them on their wedding day! What a glorious time that will be for our family!!!

The Celestial Room is a place where members meditate,
contemplate and pray. During the tour they will ask that visitors remain quiet
in this room. Take notice of the white carpet in both the Sealing and Celestial
Rooms. It was installed as a plain carpet and then someone was commissioned to
manually snip the pattern into it! Crystal sconces and chandeliers are made from Swarovski
crystals. The chandelier in the Celestial Room is amazing.
The Sealing room was up another flight of stairs. This is where a bride and groom are married not only for this life but also for eternity. I’ve been to the Mesa Temple to do Sealings,  and Jared and I were Sealed in the Mt. Timpanogas Temple in Utah. Neither temple have Sealing Rooms this large!! At this point in the tour they also point out the mirrors that hang across from each other and when you look into them you an see for eternity. This is symbolic of a temple marriage as it is not for just time but for all eternity. Alayna thought that was really neat!! We sat on the chairs in the room and I just watched her as she was taking it all in. She told me she can’t wait until she can get married in the temple! She was very excited through the whole tour and couldn’t stop telling me how beautiful she thought everything she saw was. She continued to tell me over and over that she has never seen anything so gorgeous in all her life! It was a sweet and tender experience for us both. One we will never forget!
The temple has hundreds and hundreds of stained glass windows. There is stained glass in pretty much every area we visited. It was unbelievable. The colors they chose to use to decorate with and paintings that hung in every walk way were spectacular. The temple is 85,000 square feet and is the largest temple the Church has constructed in 17 years. The temple’s spire reaches 195 feet, making it the tallest building in Gilbert. The Gilbert Temple is the 142nd operating temple of the Church worldwide. Arizona has 3 other operating temples-in Mesa, Snowflake, and in the Gila Valley. A 5th temple, in Phoenix, is under construction, and a 6th, in Tucson, has been announced.
I’m pretty sure Jared & the boys will be jealous that we got to go through already! 🙂 I’m excited to go back through with the whole family. It will be wonderful to see their reactions as they see it all for the first time!
At the end of the tour you take off your super stylish booties and then you are free to explore the grounds. 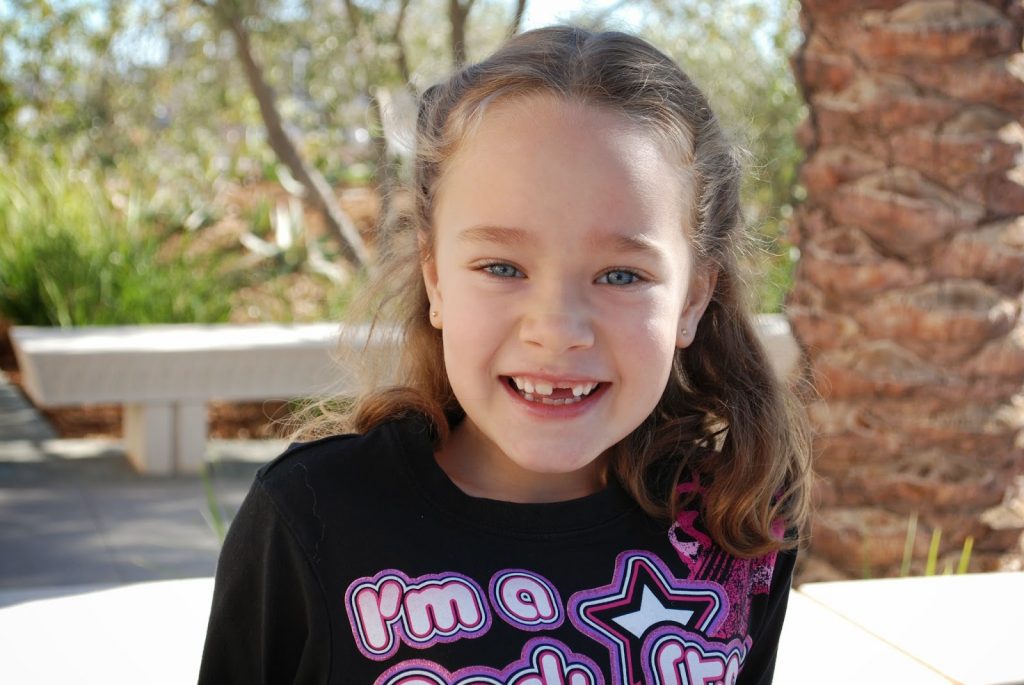 That precious smile pretty much sums up how we felt as we completed the tour! 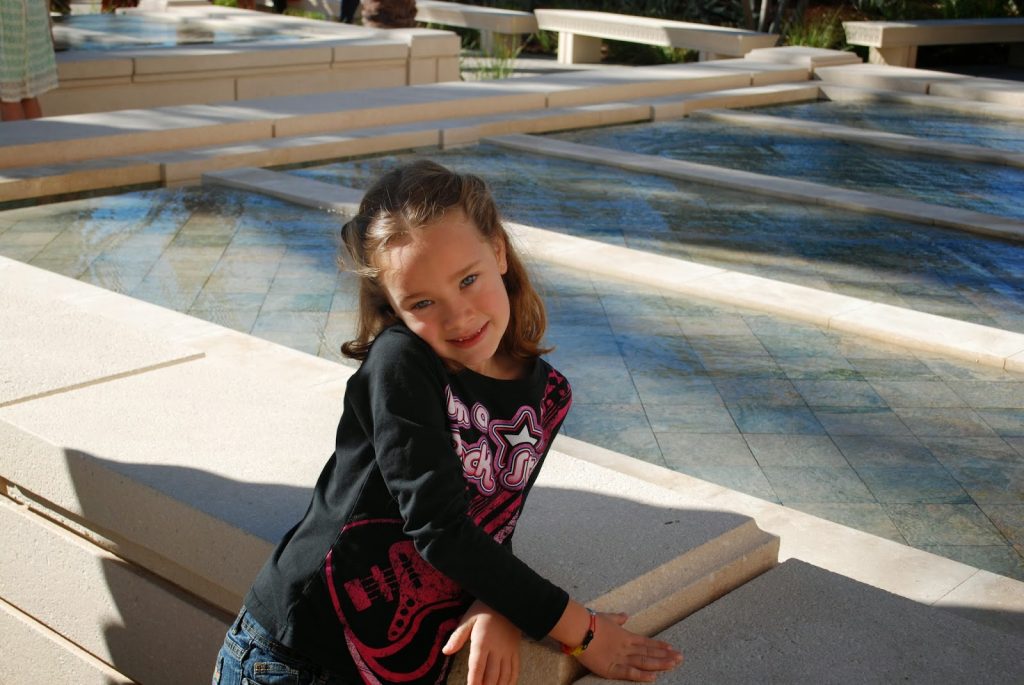 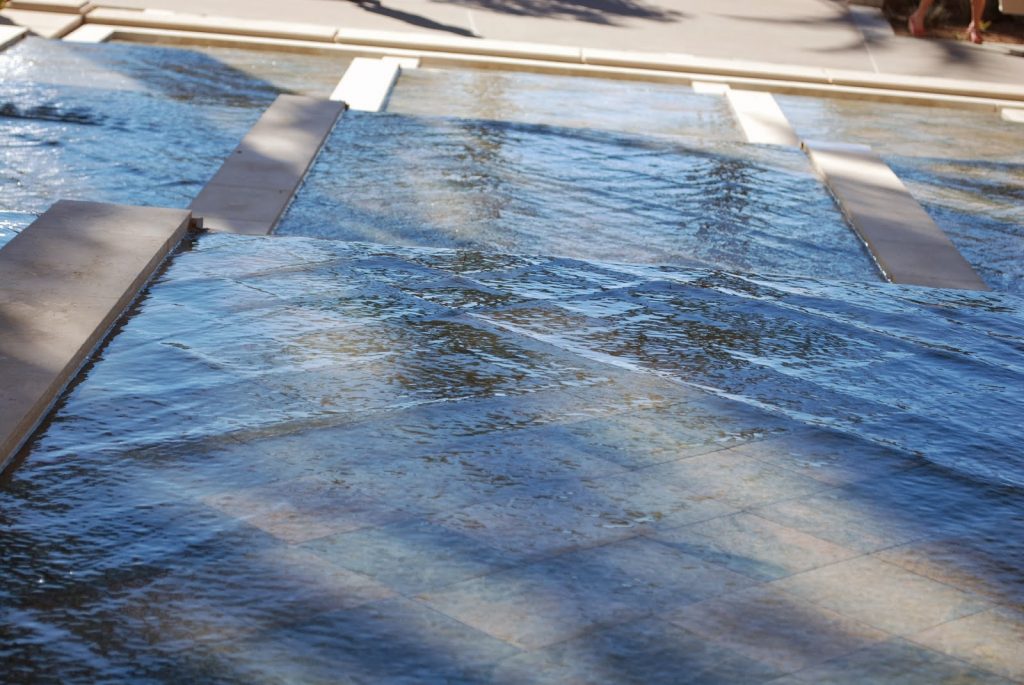 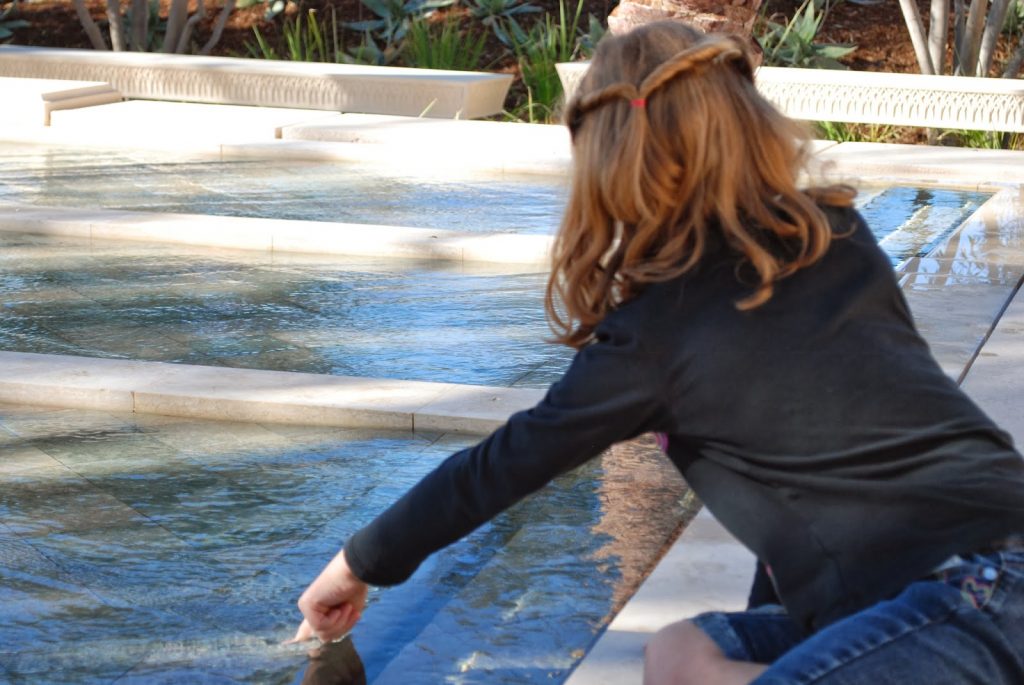 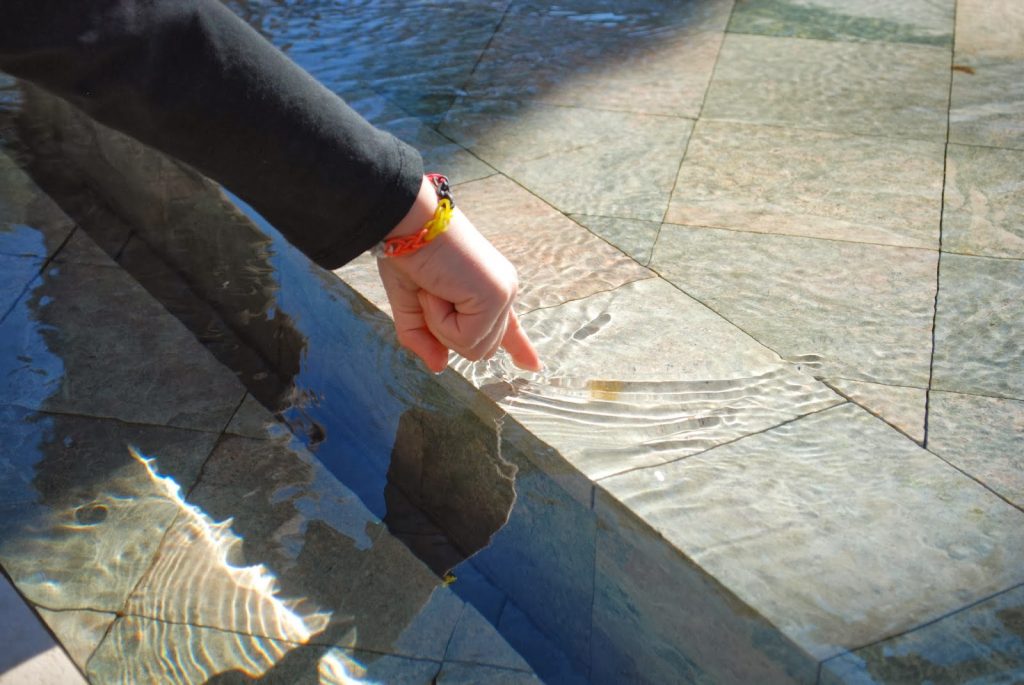 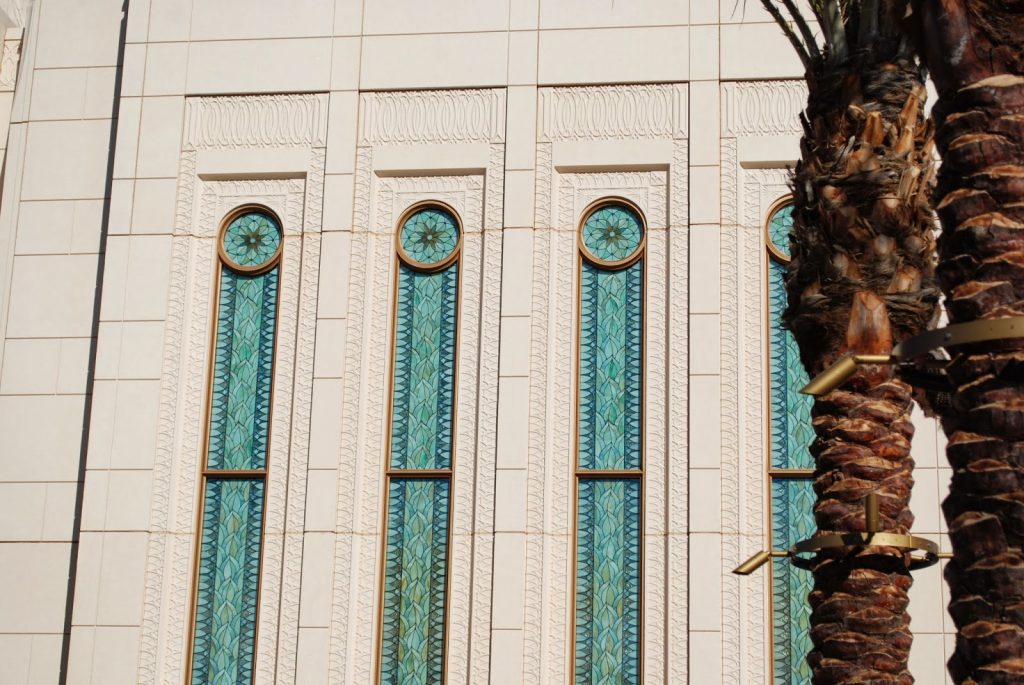 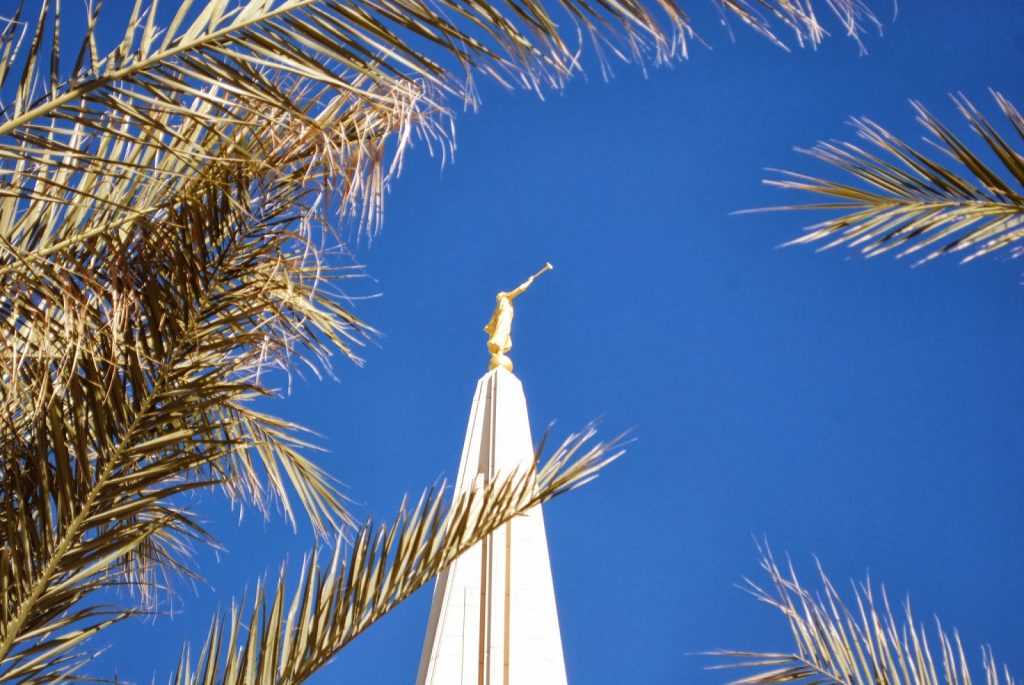 The Mesa Temple doesn’t have the Angel Moroni on top of it. Nor does it have a spire. It’s 1 of only 8 temples in the world that does not have one. (St. George Utah, Logan Utah, Manti Utah, Laie Hawaii, Cardston Alberta, Mesa Arizona, Hamilton New Zealand, and Oakland California Temples).The Gilbert Temple does!!! 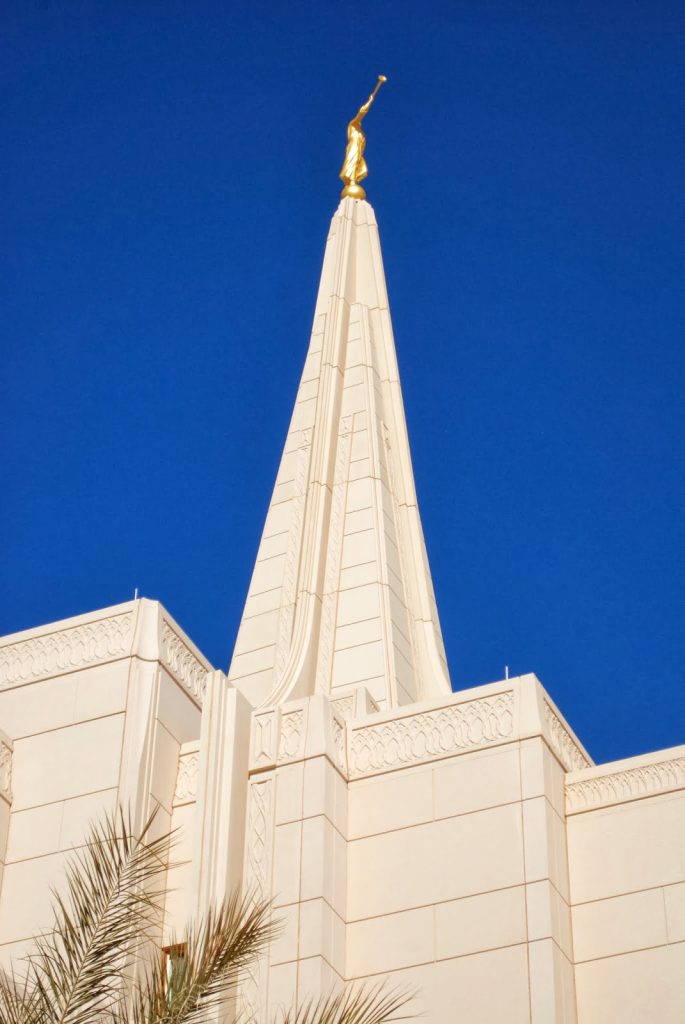 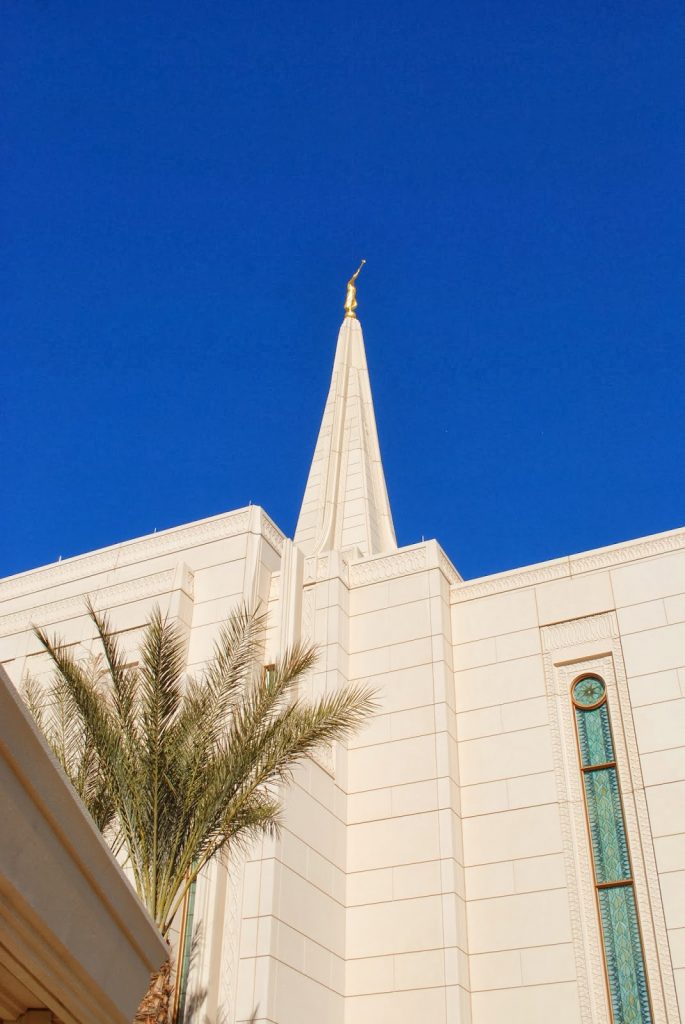 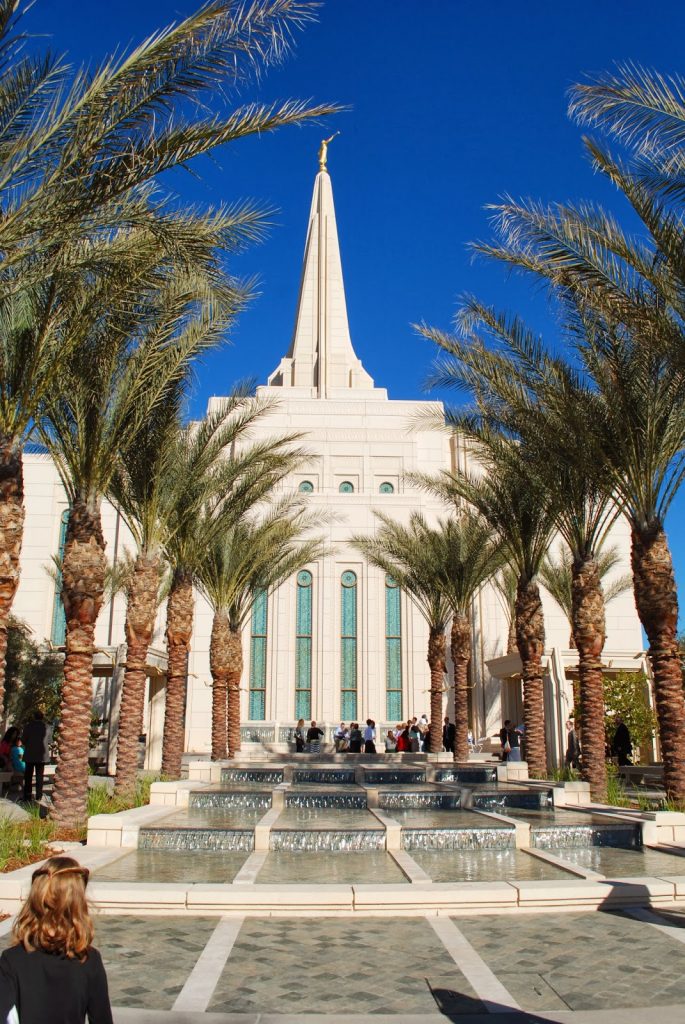 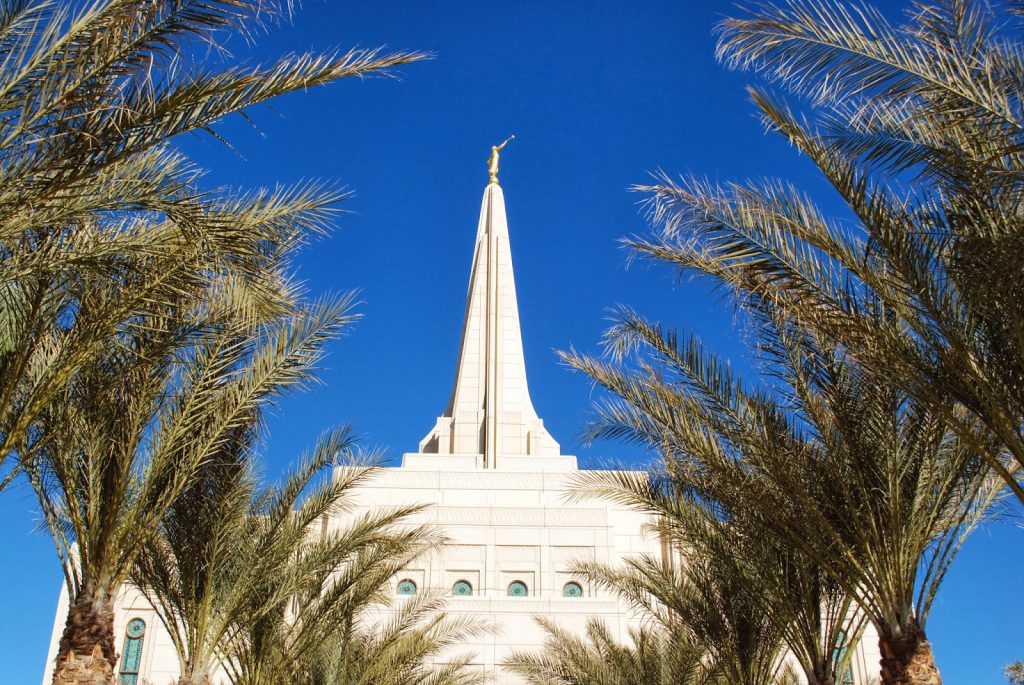 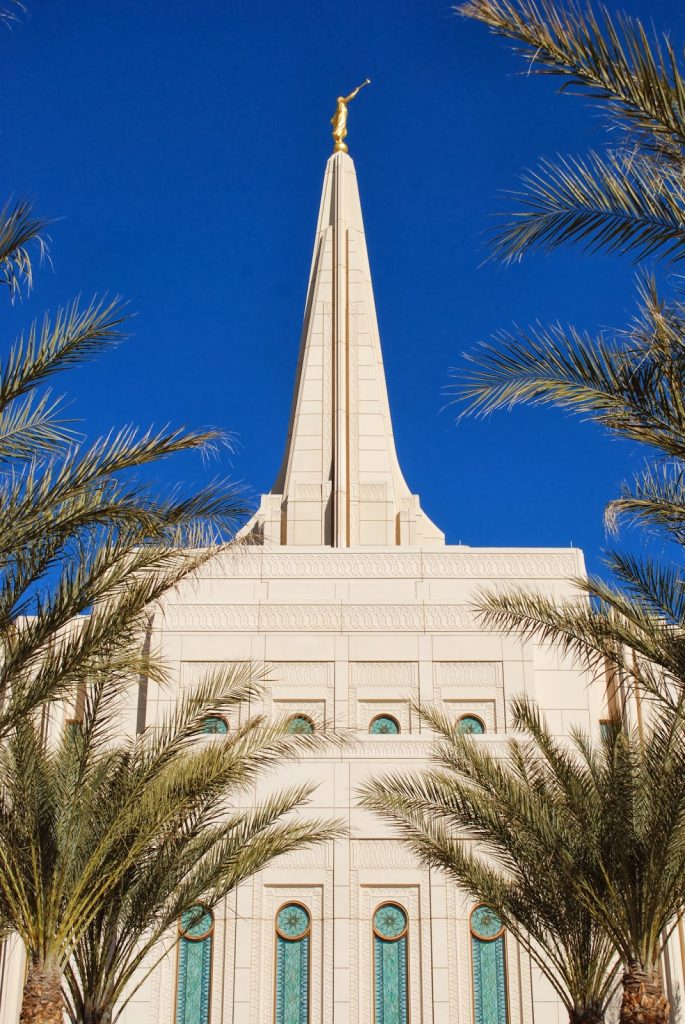 Being able to tour the temple was certainly unexpected…but we are both SO thankful that we were blessed to be able to do it! It was a beautiful morning together. 🙂 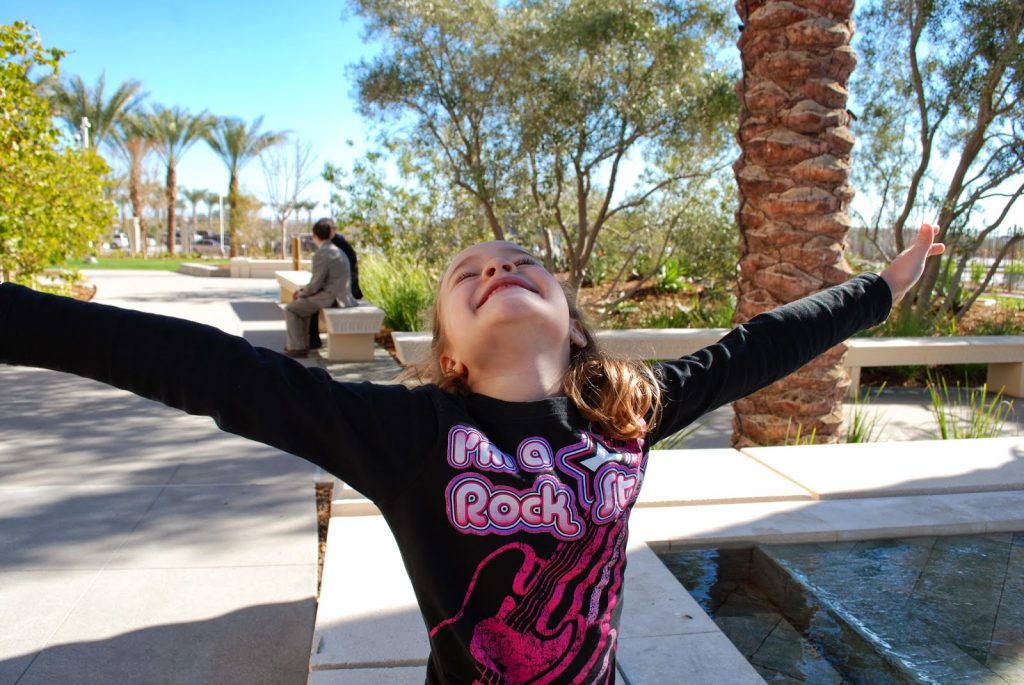 Our Girl’s Weekend didn’t end there. After the temple we went home to paint our nails and get ready for lunch and then went for ice cream! We came home to rest up a bit and then the phone rang and it was Walker ready to be picked up at the church from his campout.

What a phenomenal weekend! 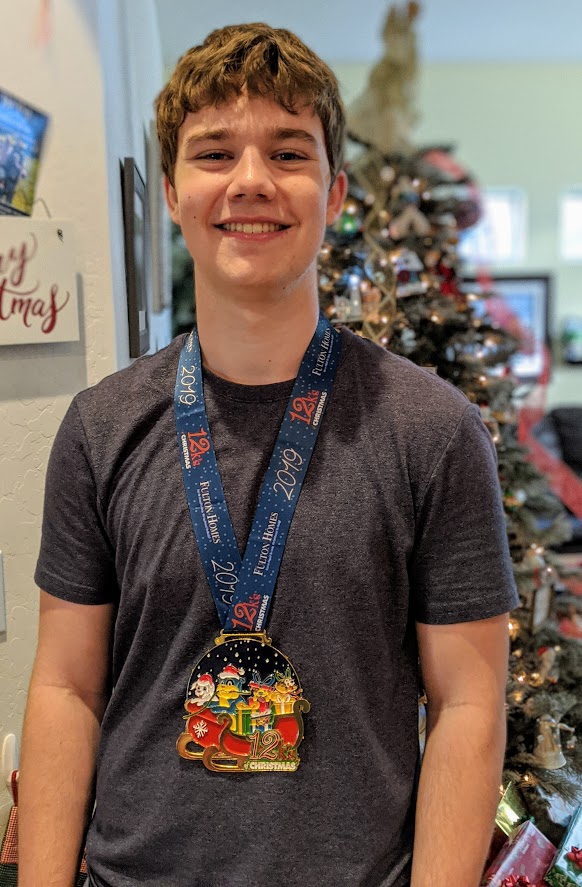 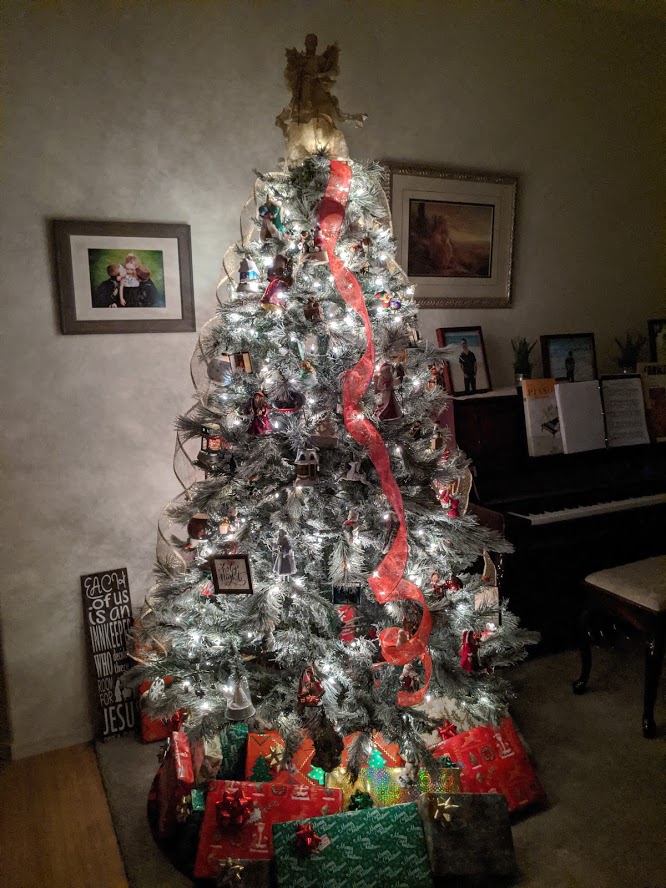